Waite research has featured among the finalists for the 2016 South Australian Science Excellence Awards, which recognise and reward outstanding scientific endeavour and application in industry and the advancement of science and mathematics education.

Two programs based here at the Waite are finalists in the Excellence in Research Collaboration category. 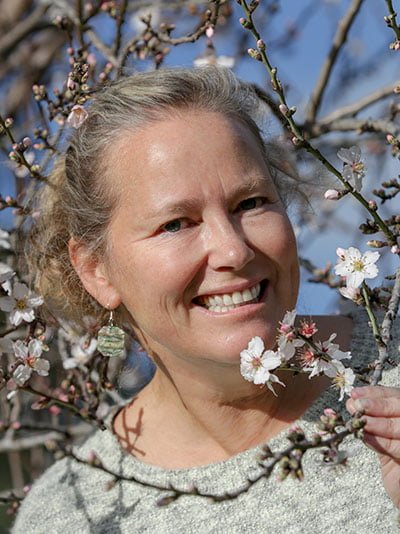 Congratulations to Dr Michelle Wirthensohn (pictured right), Program Leader of the Australian Almond Breeding Program which is funded through HIA. Michelle is a member of the Almond Board of Australia’s Plant Improvement Committee and lectures in Plant Breeding at the Waite Campus. Her areas of research interest include varietal improvement, biochemistry of almond kernel flavour, genetic mapping of important agronomic traits of almond, and water use efficiency of almonds.

Michelle is working on developing new high-yield varieties of almonds for commercial production in Australia. Five new varieties have just been released for Australian growers; Maxima, Capella, Carina, Mira and Rhea. Three of the new varieties are self-fertile, thus slightly decreasing the need for insect pollinators.

The University-run program has been collaborating with the Almond Board of Australia and it’s growers since 1997, and this successful, long-running partnership looks in good stead to continue well into the future.

The Australia-China Joint Research Centre for Agriculture and Health is also a finalist. This international collaboration between The University of Adelaide (UA) and Shanghai Jiao Tong University (SJTU) also involves state government departments in South Australia (PIRSA) and Shanghai Province, and industrial partners in both countries.

The two universities are working together to contribute to national food, water and health targets of their respective countries under four themes: agriculture and wine; land and water; food safety and quality; and health and nutrition.

Key to this collaboration was the establishment of the UA and SJTU Joint Laboratory for Plant Science and Breeding at the Waite’s Plant Genomics Centre and the joint appointment of its leader, Professor Dabing Zhang (supported by the Waite Research Institute). Focusing primarily on reproduction in cereal crops, the lab brings together the academic and research strengths of the two partners. The substantial collaboration between UA and SJTU in the agricultural, food and health sciences was also promoted by joint workshops between UA and SJTU.

Congratulations and good luck to all the finalists. Winners will be announced at a special Awards lunch on Friday August 12.

The SA Science Excellence Awards are an initiative of the South Australian Government through the Department of State Development.