Unwrapping the brewing secrets of barley

University of Adelaide researchers have uncovered fundamental new information about the malting characteristics of barley grains. They say their finding could pave the way to more stable brewing processes or new malts for craft brewers.

Published in the Nature publication Scientific Reports, the researchers discovered a new link between one of the key enzymes involved in malt production for brewing and a specific tissue layer within the barley grain.

The most important malting enzymes come from a layer of tissue in the barley grain called the aleurone, a health-promoting tissue full of minerals, antioxidants and dietary fibre. The researchers showed that the more aleurone present in the barley grain, the more enzyme activity the grain produced.

Barley is the second most important cereal crop for South Australia and contributes over $2.5 billion to the national economy. Much of its value comes from its use in beer and beverage production.

“During the malting process, complex sugars within the barley grain are broken down by enzymes to produce free sugars, which are then used by yeast for fermentation.

“The levels of these enzymes, how they function and where they are synthesised within the barley grain are therefore of significant interest for the brewing industry.

Image: Cross section of mature barley grain stained with Calcofluor White and viewed under UV light to observe the cell walls. The aleurone cells are the cube-shaped cells and are located between the outer husk (red) and inner starchy endosperm. M. Tucker. 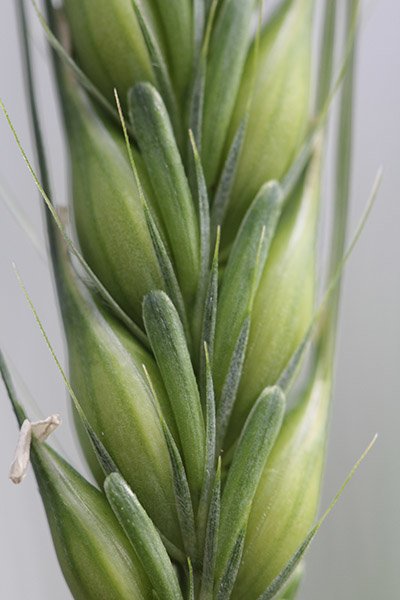 “Until now, it was not known that this key ingredient in the beer brewing process was influenced by the amount of aleurone within the grain, or that the aleurone was potentially a storage site for the enzyme.”

The researchers examined the aleurone in a range of barley cultivars used by growers and breeding programs in Australia and found remarkable variation in the aleurone layer between varieties.

PhD student Matthew Aubert used this variation to examine levels of enzymes involved in malt production. He discovered that barley grains possessing more aleurone had noticeably more activity in one of the key enzymes that breaks down starch and determines malt quality of barley, an enzyme called free beta-amylase.

“Grains with more aleurone may have an advantage that allows them to break down complex sugars faster or more thoroughly than grains with less aleurone,” says Matthew Aubert.

Associate Professor Tucker says: “We think our findings show that it might be possible for breeders and geneticists to make use of this natural variation to select for barley varieties with different amounts of aleurone and hence different malting characteristics.

“This will be of potential interest to large brewers who depend on stable and predictable production of malt, and also the craft brewers that seek different malts to produce beer with varying characteristics.”

The researchers are now trying to find the genes that explain this natural variation.

Matthew Aubert’s research was supported by the Australian Research Council Centre of Excellence in Plant Cell Walls and the Grains Research and Development Corporation.