To be precise, it’s all viticulture

Rob Bramley looks forward to the time when he doesn’t have to use the terms ‘precision viticulture’ and ‘precision agriculture’.

It’s not that he’s tired of talking about the research he’s been involved with for many years; rather, he thinks it will signal that this work has been successful.

When the tools and techniques we now think of as precision viticulture are accepted as just part of the standard viticulture toolkit, he says, individual growers and companies will assess them like anything else – on the basis of what they can provide and how much effort they will take to adopt and use.

He’s not sure how long that will take, but a couple of surveys offer some clues.

Three years ago, he and colleagues at the Waite campus polled a few wine sector people and 66 per cent said they believed precision viticulture was already delivering a financial benefit to their business or would do so within three years.

A larger and more recent survey in the grains industry found that growers who use a consultant are more likely to adopt precision agriculture, growers who adopt yield monitoring are more likely to adopt other forms of sensors to help with management and decision making, and those with yield maps require a much smaller increase in profit in order to justify adopting another sensor than those who don’t currently use sensors.

Precision viticulture refers to the use of spatial information to monitor conditions in the vineyard then make management decisions based on variations in those conditions between different parts of the vineyard.

It can be complicated, and many current tools are. And that, says Dr Bramley, who is a Senior Principal Research Scientist in CSIRO’s Integrated Agricultural Systems program in Adelaide, is the main barrier to adoption.

That’s also why a project – funded by the Australian Government Department of Agriculture and Water Resources as part of its Rural R&D for Profit program and Wine Australia – will develop a set of tools relevant to the wine sector that are accessible and feasible for general use (which means, in part, as easy as possible to use).

Dr Bramley is leading the project but credits most of the work being done to GIS software programmer Christina Ratcliff and spatial analyst David Gobbett.

‘It would be drawing a long bow to suggest the same thing will occur naturally in viticulture’, he said, ‘but given that the barriers to adoption are similar across industries it probably isn’t too far-fetched to suggest that precision viticulture could be mainstream in a reasonably short time.’ 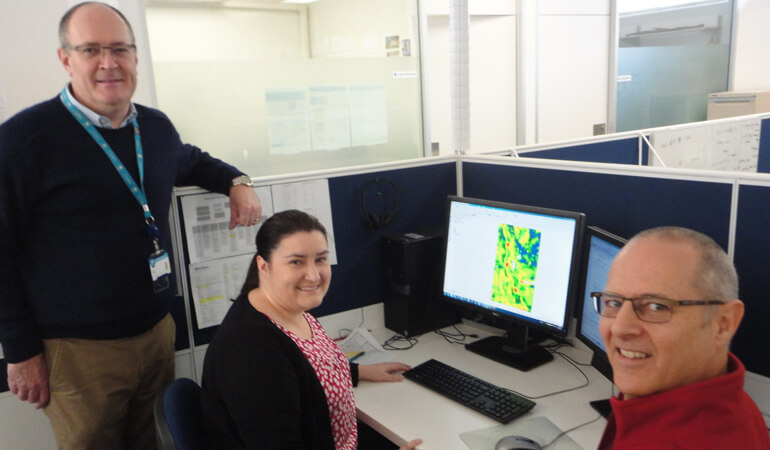 The first stage has been completed. They have identified the best available freeware platform (called QGIS) and converted a range of spatial analysis tools (developed by CSIRO over the course of several precision viticulture and precision agriculture research projects) to a format that is implementable on that platform.

This has been done using a programming language called Python, leading to the creation of a ‘Python Library’ that will sit on a server or in the Cloud and be available for all to download and use by the end of this year.

The second stage is focused specifically on the complex geostatistical analysis that underpins spatially distributed experimentation, again with the idea of simplifying the tools so they are available to non-expert users. The objective here is to make it easier for growers to conduct experiments ‘at scale’ to assist in decisions about fine-tuning management practices in their vineyards. This has involved input from CSIRO’s specialist digital research unit, Data 61.

There will be manuals and ‘how to’ guides to ease newcomers into the system, but Dr Bramley stresses that precision agriculture won’t be for everyone. Some won’t need it or will still be intimidated by it; others might dabble; still others might find a long-term use. All are legitimate positions.

The most important thing, he says, is to know why you want to use it in the first place and what you expect to get out of it.

‘If you understand that your vineyard is variable and that it might be beneficial to manage it in some way other than you would if it was uniform, you’ve probably taken the most important step’, he said.  ‘If so, there is a whole suite of tools, of which this GIS package is just one.

‘But it’s not enough to just measure and monitor zones in a vineyard. You’ve then got to be able to make some decisions about what you do differently in each zone.’ This is the reason behind the tools that assist with experimentation.

This project is supported by funding from the Australian Government Department of Agriculture and Water Resources as part of its Rural R&D for Profit program.