The science of spaghetti

A pasta industry more than 15,000km from Italy is thriving thanks to a unique collaboration between farmers, durum wheat researchers and a major food manufacturer.

Almost no durum wheat was grown in southern Australia until the 1990s when Adelaide-based San Remo Macaroni Company and a handful of growers approached the University of Adelaide about developing varieties that could handle the often-harsh conditions in South Australia.

Two decades and several new varieties later and the southern region of Australia is producing durum wheat and pasta of such high quality it is being snapped up around the globe.

San Remo has been manufacturing pasta in the South Australian capital since 1936 but relied on durum wheat grown in northern New South Wales, about 1500km from Adelaide, for many years.

Durum wheat breeder Jason Able from the University’s School of Agriculture, Food & Wine said the unique “closed triangle” relationship between researchers, growers and San Remo had allowed the southern region to rival the much older northern Australian region in production and quality.

He said the relationship also allowed San Remo to operate more efficiently, manufacture a 100 per cent durum wheat product and build an association in conjunction with growers.

“We’re very fortunate that through the grower association and the end user San Remo we’ve got a very unique relationship here where the breeding program works closely with the growers and San Remo,” Associate Professor Able said.

“We’ve got the basic fundamental science where it starts, which then feeds into the breeding program, followed by the growers, buyers and end users – the whole supply chain.” 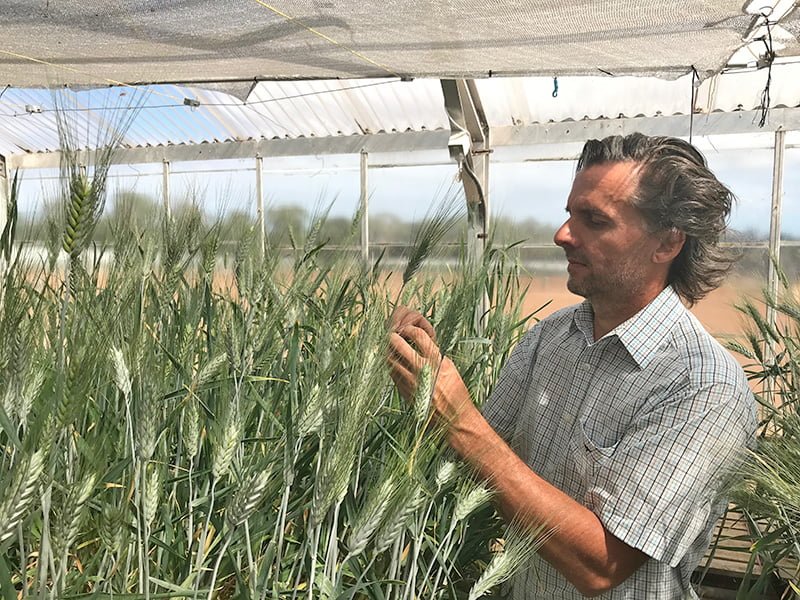 South Australia is the driest state on the driest continent on earth.

The durum breeding program was started at the University of Adelaide by Professor Tony Rathjen who used traditional non-GMO breeding methods to cross breed germplasm from arid regions such as the Middle East and Turkey. The program now uses markers to identify genetic signatures in particular germplasm for traits such as salinity and boron tolerance.

It takes 8-12 years, many trial sites and quality evaluation to develop a new variety through to commercial release.

“In those early days it was tough and Tony did a lot from a breeding point of view to develop suitable germplasm for our conditions and I guess we’ve been able to take it another step with some of the technologies we’ve been able to incorporate from a molecular level,” Assoc Prof Able said.

San Remo’s specifically designed durum wheat mill in Adelaide is one of the largest and most sophisticated in Southeast Asia and Australia and is used to test the manufacturing value of new varieties.

“Before we even release a variety we generate enough grain – 30-50 tonnes – so San Remo can make product and give it their tick of approval,” Assoc Prof Able said.

“We can then move forward with confidence knowing that we are delivering something that the growers are going to want because San Remo wants it.

“Why is it that Italians would want to buy San Remo pasta when they know it is an Australian company? Because they know it’s top shelf durum that’s being used.”

Australia has a huge grain industry dominated by the production of bread wheat and barley. But flat world prices have many farmers looking to plant alternative grain varieties such as durum, which still accounts for less than 5 per cent of Australia’s wheat production.

Bread wheat is currently selling at about AU$230 a metric tonne while durum is fetching AU$330 a tonne.

The university has released four new varieties since 2010, including DBA-Aurora in 2014, which has been hailed as a “turning point”.

The new Aurora variety has led to increased yields in more marginal areas and greater resilience to disease. Assoc Prof Able said the gains from Aurora had made durum even more attractive to farmers.

But he said significant breeding programs for bread wheat and barley in Australia meant it was a constant challenge to develop varieties which will be competitive in the market place. The next durum variety will more than likely be released by the university in September 2018 with a further variety due for launch in 2020 or 2021.

“I think we laid the golden egg a couple of years ago with the Aurora variety, which is doing very well, but we can’t rest on our laurels,” Assoc Prof Able said. “We need another variety that matches it or is better because if we rely solely on one or two varieties it is a disaster waiting to happen.”

Durum has been grown in New South Wales since the 1950s in areas that have higher rainfall and more nutrient rich soils than southern Australia. Global durum production is typically between 30 and 40 million metric tonnes a year.

Australia exports a little over half of the 500,000 – 600,000MT of durum wheat it grows a year. But it is the high quality of the clean, green grain, including protein levels consistently greater than 12 per cent that has Australian durum in demand globally.

The Australian industry was hit hard by a crippling drought and issues with crown rot disease in the 2000s but more favourable conditions and the release of new varieties has seen the quality and quantity of durum produced in recent years increase.

San Remo Milling Manager John Stuart said the company soon recognised that a “cut and paste” of the NSW durum industry was simply not going to have long-term success in South Australia.

“What was required was a strong collaboration with the SA breeding industry to ensure that growers had access to world class genetic material that met our local needs, as well as developing effective partnerships with growers who were prepared to grow with us as the industry progressively developed,” he said.

Stuart said niche crops in Australia such as durum needed support to maintain their appeal not only against more mainstream cereal crops but against the large durum producers such as North America and Europe.

“To ensure that Australian origin durum can be manufactured into pasta and be competitive globally, our breeders need to be supported,” he said. “San Remo is happy to play a part in that support and does so not simply by financial contributions, but also in practical ways with in-kind services such as test milling.”

San Remo enters into land-based contracts with growers in southern Australia, locking in prices and quantities before harvest. While this means the company consumes much of the southern crop each year, the surplus left over for export markets is not known until after harvest.

Grain marketing company Mellco works closely with domestic and international durum wheat processors. Managing Director Steve Mellington said while the quality of durum from southern Australia was not in question the lack of continuity of international supply was a potential issue.

“The premium end of the market actively seeks out Australian origin durum,” he said. “The international market is happy to embrace our product but they need to get that continuity to buy with confidence.”

Mellington said increasing production through a continued co-ordinated approach was the best way to shore up export volumes.

SADGA Chairman Alwyn Dyer first planted durum in the Kaniva district near the South Australian/Victorian border in 1994 and has had a contract with San Remo since 1995.

He said the development of better varieties had coincided with improved farming techniques as growers gained experience with durum in new environments.

“The relationship between the association and the university has been able to fast track the release of newer varieties that perform better in hostile environments and tough seasons,” Dyer said. “Especially Aurora, it is a bit more tolerant and farmers have learnt to manage their durum crops better.

“If San Remo hadn’t of put the money in early on to support the industry and help get it off the ground along with the university, the industry would not have developed the way it has.”

Dyer said there was an increasing amount of uncontracted durum in southern Australia this season meaning there would likely be greater volumes available for export following the November harvest. He said while many growers liked the security of fixed-price contracts, the larger and more stable supply for export markets would lead to greater competition among buyers.