A scientist who has been at the forefront of extending knowledge and advice to help grain growers manage costly soil-borne diseases has been officially recognised for his efforts and achievements in communicating the outcomes of research.

Dr Alan McKay has been named the recipient of the 2018 Grains Research and Development Corporation (GRDC) Southern Region Seed of Light award which acknowledges outstanding effort in the extension of outcomes from GRDC grains research investments.

The Seed of Light award, voted upon by the GRDC Southern Regional Panel, was presented to Dr McKay at the GRDC Grains Research Update in Adelaide last month.

Dr McKay is the Leader of the Soil Biology and Molecular Diagnostics group at the South Australian Research and Development Institute (SARDI), a division of Primary Industries and Regions SA (PIRSA).

In presenting the award, GRDC Southern Regional Panel deputy chair Dr Mike McLaughlin said Dr McKay over many years had demonstrated outstanding commitment to not only developing a greater understanding of soil-borne diseases and other aspects of soil biology, but also to equipping growers with knowledge and tools for improved management of soils to reduce potential yield losses. 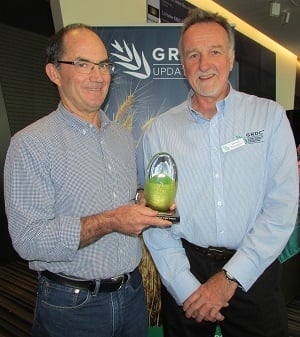 “Soil-borne diseases can cause significant yield losses in broad acre crops,” Dr McLaughlin said. “It has been estimated that annual potential national losses in wheat alone from soil and stubble-borne pathogens are more than $1,060 million and $792 million, respectively.

“The dedicated work undertaken by Dr McKay continues to support growers in combating these diseases – without his input and contribution to research, development and extension in this particular area, the grains industry would no doubt be incurring far greater yield and economic losses than it is now.”

Dr McKay’s duties at SARDI include managing the Molecular Diagnostic Centre (MDC) here at the Waite. Research within the centre forms a major component of the five-year SARDI-GRDC strategic agreement valued at $50 million.

He also oversees and is involved in a portfolio of research projects to improve management of detrimental and beneficial soil-borne organisms of importance to Australian agricultural industries, including grain, horticulture, viticulture, pastoral and sugar.

Dr McKay has played a major role in the development of the PREDICTA® B soils analysis technology, which is now recognised internationally for its capacity to accurately identify and measure soil pathogens, as well as the nutrition status of soils.

A GRDC investment, PREDICTA® B is a DNA-based soil testing service provided by SARDI which enables growers to identify the pathogens posing greatest risk on their farm, monitor the effect of changed farming practices and seasons on disease populations and make better informed variety, rotation and paddock management decisions.

Dr McKay, who has been at SARDI since 1978, is currently involved in a suite of major projects, many of which are GRDC investments. These include efforts to improve the value of molecular diagnostics to the grains industry, improved management of root lesion nematode, the national crown rot program, new fungicides for crown rot management, the National Paddock Survey, and fungicide control of Rhizoctonia.

Dr McLaughlin said Dr McKay continued to be a well-received speaker at GRDC Grains Research Updates and at field days and conferences across the nation. He has also co-authored numerous research publications.

“From a scientific perspective, Dr McKay has achieved an enormous amount and he is highly regarded and respected within the research community.

“But it is his rapport with growers and agronomists and the manner in which he communicates to them important outcomes from research he is being recognised for with this Seed of Light award.

“On behalf of the GRDC and the broader grains industry, I congratulate Alan for his untiring efforts to support growers in their quest for improved farming systems and greater profitability,” Dr McLaughlin said.