There are roughly 1,500 people on the Waite campus – from students to professors, technicians to human resource managers, and even volunteers. They work and study across a range of campus partner organisations.

This series of articles will introduce you to some members of the Waite community – who they are, what they do, and why it matters!

I was born in Birmingham, England, and studied marine biology at University in Swansea, South Wales.

Growing up, I always wanted to be a fish farmer. I had a thing about fish, and wanted to try and work with something I really liked. Marine biology was good, but far too ecological for me. I didn’t care about counting limpets and barnacles on rocks… I wanted to know what makes fish tick.

I had a chance to do a PhD in fish physiology at Brunel University, just outside of London, which ended up being terrific because it was hands on; measuring fish hormones to do with stress, reproduction and growth.

My post-doc looked at chemicals in river water that were causing hermaphroditism in fish. 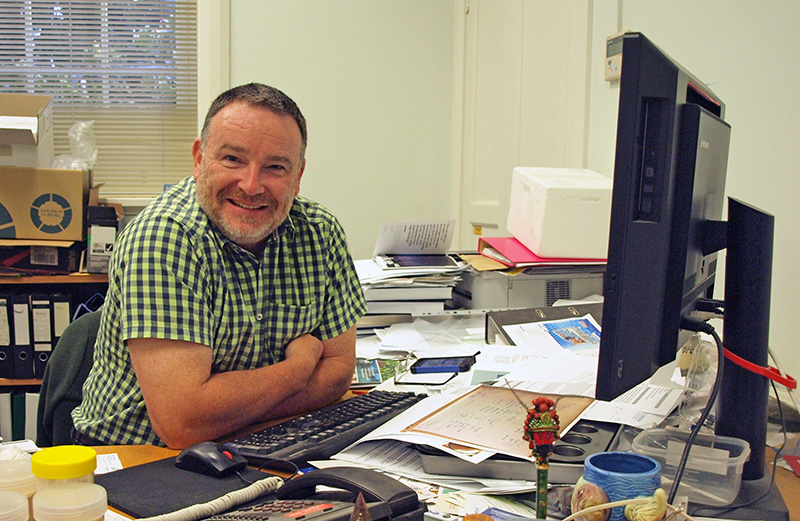 Although I was only there for a year, it became clear pretty that endocrine disrupting chemicals were coming from residential and industrial sewage systems. We had to sign the official secrets act at the time, as it was only early days and they didn’t yet know what was causing it. The group I was working with went on to find that endocrine disrupting chemicals are in lots of products that we use today that aren’t being mitigated by the sewage treatment process, so they’d just pass through and get to the fish.

Stints at the Leigh Marine Laboratory at the University of Auckland, New Zealand, and Deakin University in Geelong teaching aquaculture followed. I started to look further afield than just fish, and took a job at AgResearch in Hamilton, New Zealand, looking at stress effects on farm animals, specifically red deer. Those animals are only one or two generations from the wild and aren’t domesticated… a lot like wild fish. If you had a background in stress physiology in rats or mice that have been domesticated for a long time, you won’t be as used to handling animals that are unpredictable, semi-wild, and trying to kill you!

The group I was working with had developed a remote blood sampling machine that the deer could wear as a backpack, termed the ‘DracPak’, which could continuously sample blood from the jugular and store it in tubes kept on an ice pack on the back of the animal. That way, we could determine as and when the deer would get stressed in certain situations by measuring the stress hormones in the blood.

Eventually I got a job back in Australia working at Flinders University for 7 years teaching aquaculture again. The students were awesome, I really enjoyed doing some neat tuna work up in Port Lincoln, and got the chance to go to Japan four times to follow experimental fish to the Tsukiji fish market. That way, I got to see how different diets or the impact of stress affected the shelf-life, appearance or even taste of fish served on the market stalls and how the consumer would respond to those changes.

Along the way I’ve became more interested in post harvest issues like value adding and how to get fishermen a better return for their catch. For instance, instead of selling a whole dead fish and getting a low price, how can you slice and dice it into many different products and get a larger profit? That led me to work at SARDI for 5 years developing those ideas at West Beach and at the Regency TAFE site.

After a while, I became tired of working for companies and wanted to be my own boss, so I decided to go out by myself as a contractor. Soon after I started, I got talking to Bob Gibson, who mentioned he could have a role for me. And that’s when I started working for FOODplus on the Waite campus looking at products that weren’t seafood.

One of the things I’m working on right now is the ‘Potato Project’, which has been on the go for about 3 years. Industry came to us and asked how we could make use of all the potatoes that are the wrong shape and size for the supermarkets. We came up with potato puree – it’s a relatively new product that isn’t competing with existing ones, such as mashed potato, as it has a much higher water content.

As it’s mostly modified starch, you can make all sorts of interesting textures and fillers for products, essentially giving them the ability to have structure and hang together. So under the company name ‘Puree Australia’, we started putting it into a variety of things: soup, stews, bread, crackers and dips. It works well as a custard too.

Next we thought, what’s the most difficult thing we can make out of potato puree? So we came up with the challenge of creating a dairy free ice cream for an honours project. As a scoop-able ice cream, it was a bit of a tough ask, but as a partly frozen, soft serve product, the texture was just right! It’s a perfect way to bring a product from what would otherwise have been wasted, and it satisfies some modern day requirements that reflect the consumers changing needs: it’s vegan, dairy-free, and has less sugar and calories than ice cream.

What motivates me is the ability to give people a ‘step up’ in the world. Whether that’s  helping students graduate, or assisting a small business with getting a new product on the shelf, it’s the same sort of feeling. Back when I was a lecturer, I could recognise when certain students had the spark that allows them to make the most of the opportunities that they have. There’s nothing more pleasurable then seeing students grow and develop into fine people who are contributing. I get a lot of pleasure from that. You may be just one rung on their ladder, but it’s very fulfilling.

The lesson here is – don’t pigeon-hole yourself. You’re more than just a molecular biologist, or ecologist, or geneticist… you have skills that are very transferable.

I’ve been through many transitions; my career has changed as life goes on. Opportunities to move on in the world and learn new things get presented to you at all stages. And don’t do something you hate, do something you like. If you’re not liking what you’re doing, try and change it, because it’s so important to stay positive about and appreciated in what it is that you do.

Emma Aspin is a second-year PhD student from the UK with a passion for science communication. Upon arrival to the Waite, Emma was astounded by the diversity of workers, students and scientists across the campus and knew that there were some great stories to be told! As well as having some fun, the column is a great opportunity to discuss your work and have a chance to reach the public or even future collaborators.

If you would like to be featured in the column and have time to chat to Emma sometime, drop her an email: emma.aspin@adelaide.edu.au.