Meet the People of Waite: Adam Smith and Najid Pereira-Ishak

There are roughly 1,500 people on the Waite campus – from students to professors, technicians to human resource managers, and even volunteers. They work and study across a range of campus partner organisations.

This series of articles will introduce you to some members of the Waite community – who they are, what they do, and why it matters!

Najid: I was born and grew up in Sydney, but my parents have an interesting background. My mum is from Singapore, with heritage from Malaysia. My dad was born in Kenya, but his parents are Portuguese… so I’m a mixture of Portuguese, Singaporean and Malay! I studied mechatronic engineering at Macquarie University before getting a job here on the Waite Campus at CSIRO.

Adam: I grew up in a little town called Guyra in northern NSW on a farm. I spent 4 years travelling between high school and university and then went to Newcastle to study mechatronic engineering, just like Najid. We’re both now research technicians at CSIRO in Agriculture and Food.

Engineering for the vineyard

Najid: Adam and I work on different projects but we essentially do the same thing: data acquisition and data processing. The project I’m currently working on is thermally imaging plants – particularly grapevines, as the whole theme of our group is viticulture. 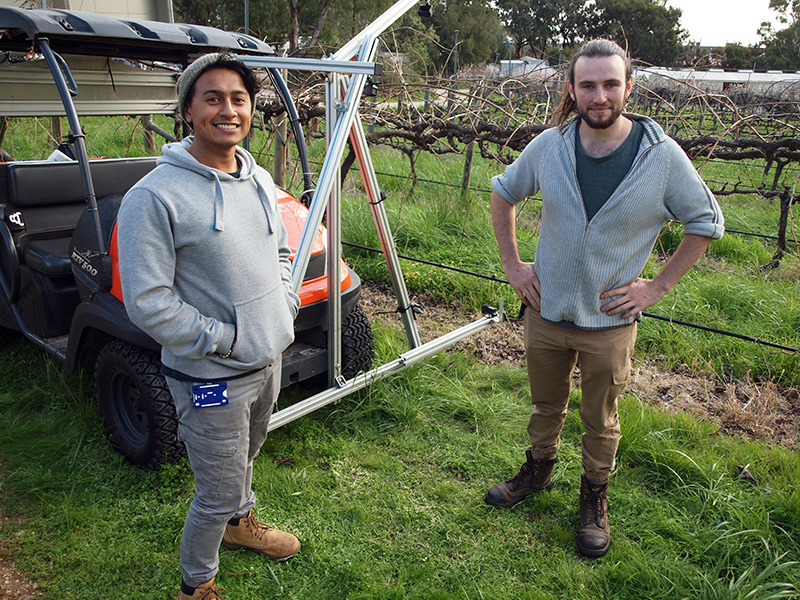 Images used in the ProxiCrop system

I was tasked with making a thermal camera to image grapevines so you can figure out if they’re undergoing any heat stress, and from that you can control irrigation. The next step would be to automate this, so you essentially have self-watering, robot vineyards! Eventually, we will work on using weather data provided by the Bureau of Meteorology which will allow the system to know if rain is forecast that day. This would save the farmer a lot of time and effort, as the system will automatically know when to irrigate without any human input.

This developed sensor unit is called ProxiCrop, which means proximal sensing in crops. It’s a small system inside a box, with two sensors: one to collect a colour image and the other to collect a thermal image. It also has a dongle coming out of it for GPS, so you know the location of where your sensor is.

Finally, wireless communication enables it to talk to the server online and send all that data straight to my computer, so I can process it without ever having to go out into the field. You can distribute as many of these units as you want and get a collective dataset for any crop or field under various conditions, which is useful when comparing treatments.

I love this project because it’s using most of the skills I’ve acquired in university, and it’s nice to see the practical application of everything I’ve been taught to develop something new and innovative. It’s a great feeling to come up with something brand new and be the first guys to create something unique and be a part of it – and that’s why I enjoy being in research! 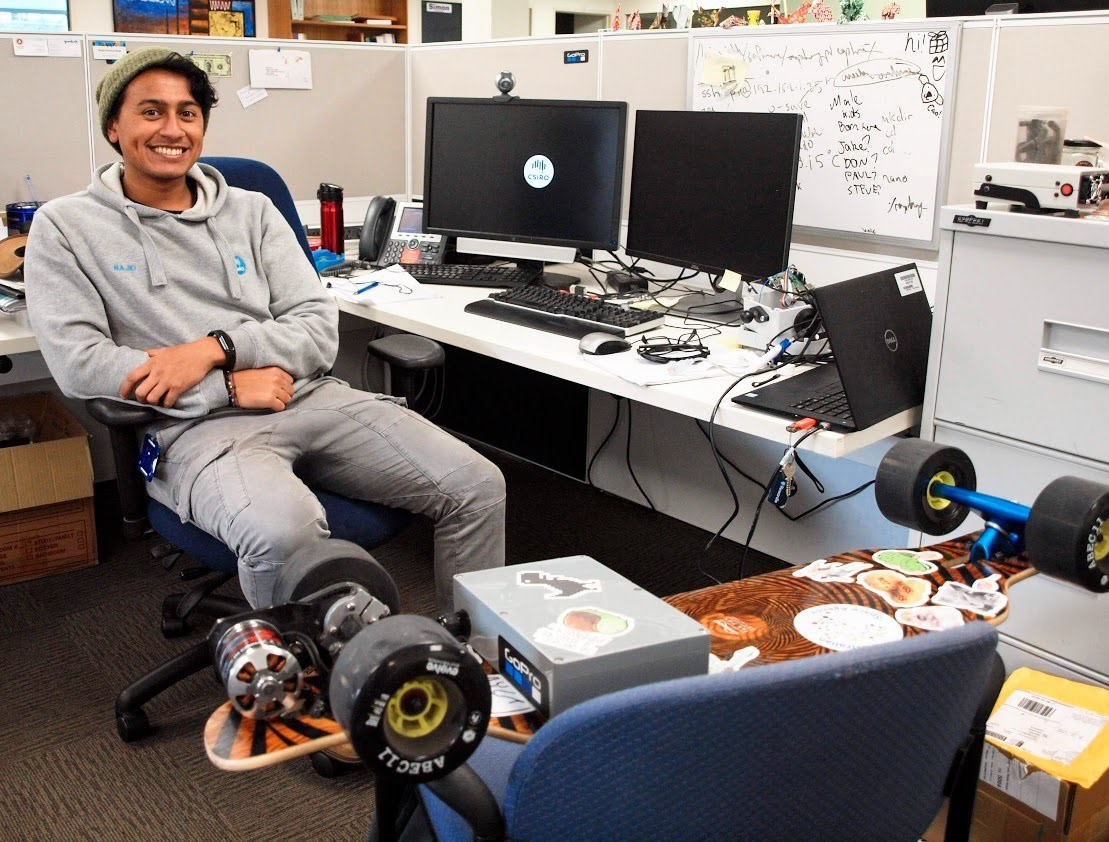 Adam: I’m working on a couple of projects, particularly trying to find leaf area index for vineyards in an automated fashion. We’re using an all-terrain Kubota with a camera rig mounted to it that takes a stream of photos from below the canopy. It then looks at how many holes are in the canopy, and the size of these holes to calculate how much sunlight is actually hitting the fruit.

Another project I’m helping to facilitate is yield estimation. We started with grapevines, but we’ve also extended it to avocados and even looking into abalone in fisheries… so you can see the extent of cross industry applications that’s possible there! 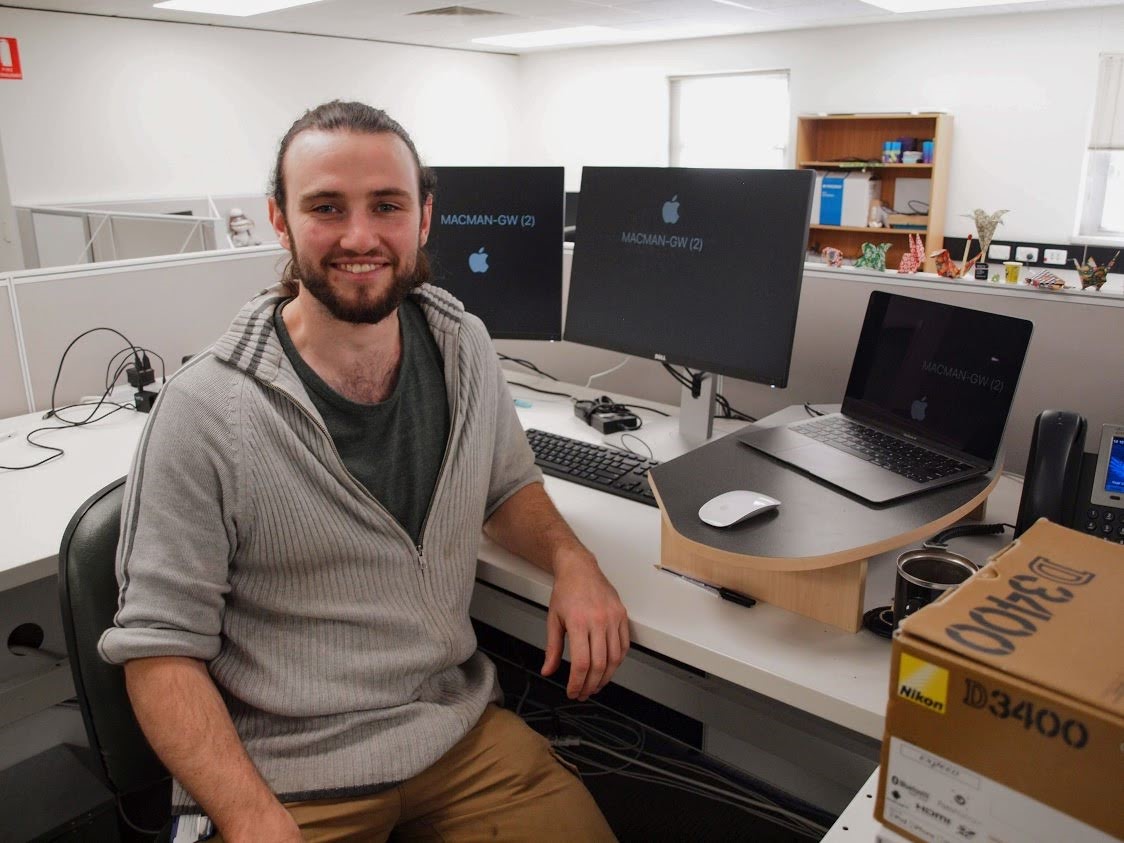 I like all of this stuff because it’s a biological interface with engineering, which is something that you don’t get with most types of engineering. Biology has a lot more unknown and error in it… which is hard. As I come from a farm, I’ve found that it’s cool to be able to use some of the knowledge I got growing up, and give back to the industry by automating some processes. I saw so many inefficiencies growing up, and even as a kid you think “this could be better somehow, surely?” Now I’ve grown up and found that I’m in the position where I can make it better.

Najid: One of the best things about working at CSIRO was the steep learning curve I had to understand the biological perspective of the system as well as the engineering one. Being on this campus, I’ve gotten to learn lots of things I didn’t know before such as salt tolerance and all sorts of different biological findings that have come about in research.

Adam: Engineering seems to be a series of small victories. You have a problem and it’s a big issue for a couple of days, or even just a couple of hours, and then you solve it and it’s gone and another one comes up again and again… the cycle continues, but eventually you end up with a fully functioning product.

Najid: And there’s always room for improvement! I mean, the first car ever invented had a totally different shape to the ones we drive now. It makes you think. Every feature of a building, machinery or car has purpose and function. Every element is designed from scratch.

Adam: I’d like to get into medical engineering someday. I like that a lot of algorithms are designed around neurology, especially the ones behind artificial intelligence. It’s a rapidly progressing and very interesting field. Meanwhile, I’m blacksmithing in my spare time – been doing that since I was a little tacker! – and I enjoy brewing beer too. It’s actually real fun to brew beer with scientists rather than engineers; scientists know how to follow the procedure properly, whereas engineers tend to overthink things. Me… I hate following procedures! I was really into Lego as a kid and would never build the design on the box, I’d much rather build things from scratch. I guess that love of tinkering and building things is what drove me to become an engineer.

Najid: A big dream of my brother and I was to build an electric skateboard. We tried a few years back, but it broke within two weeks! I’ve been planning for over a year to build another one, and when I finally had enough money saved, I splurged on all the pieces and put it together. You guys may have seen me around doing test rides along Waite road and sadly carrying it back up the hill… because it broke! But now I’ve made a few tweaks and it’s had its final transformation, like a beautiful butterfly. If anyone wants a go sometime, come find me! Working at CSIRO is great, and the culture here in Adelaide is amazing and unlike anything I’ve experienced before, so I’m hoping to stick around for a really long time. 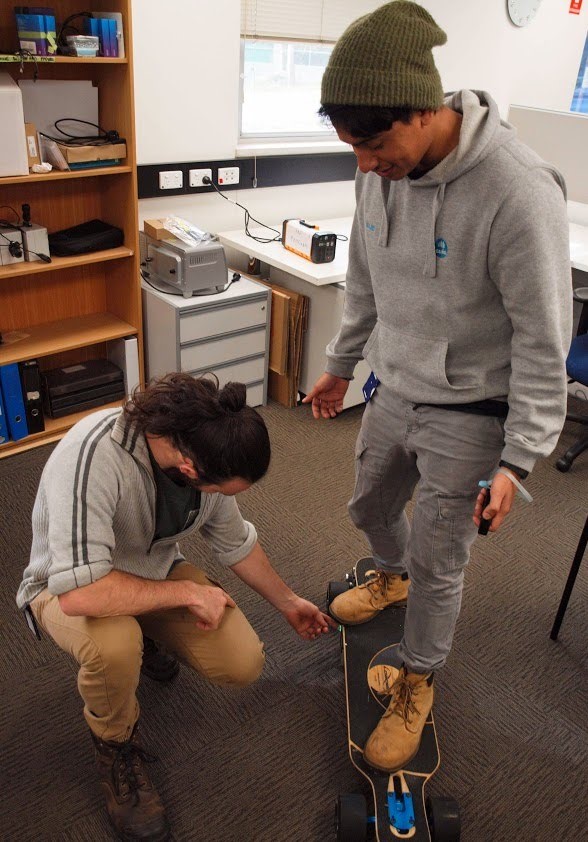 Emma Aspin is a second-year PhD student from the UK with a passion for science communication. Upon arrival to the Waite, Emma was astounded by the diversity of workers, students and scientists across the campus and knew that there were some great stories to be told! As well as having some fun, the column is a great opportunity to discuss your work and have a chance to reach the public or even future collaborators.

If you would like to be featured in the column and have time to chat to Emma sometime, drop her an email: emma.aspin@adelaide.edu.au.