A wide variety of excellent research was on display last week when some 230+ staff and students from across the University of Adelaide’s School of Agriculture, Food and Wine came together for their annual Research Day.

Held at the Adelaide Hills Convention Centre at Hahndorf, the day was a chance to share research highlights, celebrate successes and catch up with colleagues from all the research groups within the School.

Industry engagement and cross-disciplinary collaborations were a key focus of the program this year. Presentations were given on research-industry collaborations on Agave for biofuels (Rachel Burton and AusAgave’s Don Chambers); wine & viticulture projects with Treasury Wine Estates (Catherine Wotton from TWE); and weed management in pulse crops (Chris Preston and SARDI’s Dili Mao). 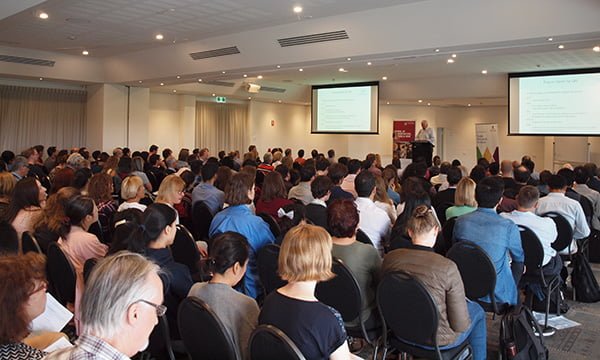 Selected researchers from across the School presented on research key publications from 2017, and School award winners in 2017 were also featured on the Program.

This year, a video competition was run for the first time in 2017. Members of the school were invited to submit a short video of up to 3 minutes to share their research with a general audience. Five videos were shown to the Research Day audience who voted for their favourite based on the clarity with which their video conveyed the purpose and relevance of their research, and what the outcomes and impact may be.

First prize was awarded to James Walter for his video Technology for Wheat Breeding, and second prize to James Cowley and Jana Phan for the Team Plantago video. Watch these videos below now!

The Research Committee thanks everyone for their participation and support, especially the speakers.