45 years strong! Milestones for members of the Waite CSIRO team

Rosemary Warren and Peter Clingeleffer (both CSIRO Agriculture & Food here at Waite) last month both clocked up 45 years with the CSIRO. Congratulations to both of you! 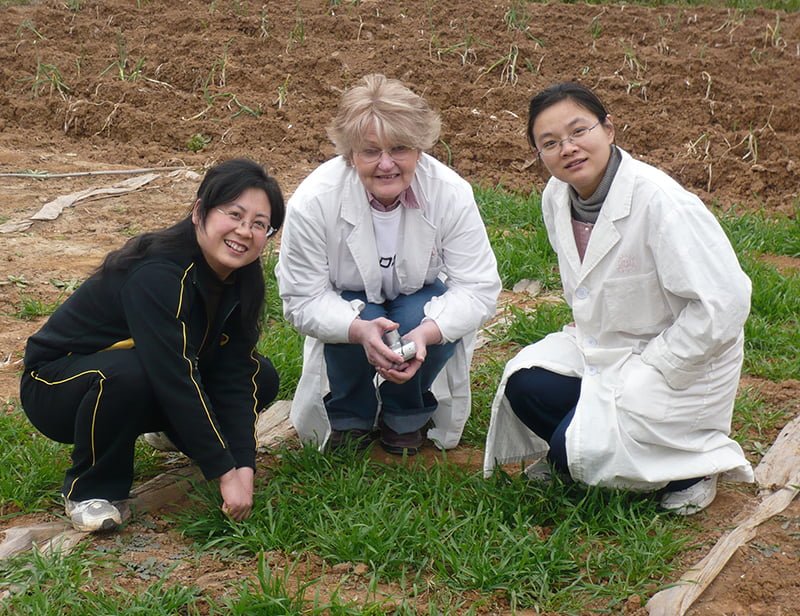 Rosemary Warren joined the CSIRO Division of Soils as a Technical Assistant in 1972, working on mycorrhizal associations with tree roots. “The opportunity to work at CSIRO presented itself partway into a Pharmacy degree and so I took it,” Rosemary said. “My work has always been both lab- and field- based and CSIRO gave me opportunities to further develop my career through learning a range of molecular microbiological techniques and studying Biometry and Agricultural Experimentation at the Waite.”

As a Technical Officer, her research was expanded to include symbiotic nitrogen fixation in native trees. After a brief period in the Townsville labs, she returned to the Waite and worked as a Senior Technical Officer on a diverse range of projects from soil chemistry through to microbiology and plant pathology.

From the mid-1990s Rosemary was involved in collaborations with the Chinese Academy of Agricultural Science and China Agricultural and Zhejiang Universities in microbiological suppression of root diseases. Over the years this collaboration has expanded to include the Shandong and Hebei Academies of Science. The opportunity to work with international collaborators via scientific exchange visits has been a highlight for Rosemary.

“Another highlight has been my involvement in projects for commercialising a plant-growth promoting inoculant and its adoption in Australian and American grain cropping systems.”

Today, Rosemary is an Experimental Scientist in the Soil Ecology and Biological Function Team in Agriculture and Food. Her research is focused on delivering novel options to growers for sustainable management of soil-borne microbial communities that impact on plant production systems. A major focus has been the development of plant-beneficial microbes as inoculants to enhance nutrient availability and limit root diseases in cropping systems. This has included diagnostic tools and formulation technologies to support inoculant registration, their integration in cropping systems and adoption by growers.

“In 45 years I have seen a great deal of change in CSIRO and have always been proud to say that I work for the organisation,” Rosemary said.

Peter Clingeleffer joined the CSIR0 Division of Horticulture in 1972, after graduating from the University of Tasmania (B Agr Sci, Hons). His contributions to the Australian viticultural industries include involvement in the development and adoption of low-input management systems for cost efficient wine and dried grape production.

This has included the development and application of minimal pruning, light mechanical hedging and various crop control techniques to minimize seasonal effects on yield and quality and for dried fruit, the introduction of highly productive, cordon based systems for mechanisation of dried grape production by trellis drying, integrated with high yielding varieties and rootstocks.

His involvement in breeding and vine improvement led to the release of four new wine varieties (Cienna, Tyrian and Rubienne in 2000) and Mystique in 2017; the joint release with the USDA of the high yielding, rain tolerant Sunmuscat and Sunglo drying varieties; Black Gem, an early ripening, disease resistant currant and the table grape varieties Millennium Muscat™, Magic Seedless® and Mystic Seedless®.

Peter has also been involved in the development and successful adoption of improved grape drying and storage practices to enhance quality of dried fruit, and strategies for insect control in storage to reduce the reliance on chemical fumigants such as methyl bromide.

From 1996 to 2009 he was the Riverlink Viticulture Program Manager, a key regional role responsible for coordination of regional grape research, development and extension across 3 state agencies and CSIRO in the Sunraysia region. He chaired the former National Vine Improvement Committee for 15 years and was a member of the Sunraysia Institute of TAFE, Rural Agricultural Advisory Committee for 25 years.  He received the prestigious Graham Gregory award, sponsored by Horticulture Innovation Australia for his services to the dried grape, table grape and wine industries in 2010.