The Taras Ochota Scholarship Fund was launched last week to support aspiring winemakers studying at the University of Adelaide.

The Taras Ochota Scholarship Fund has been established by the University of Adelaide as a fitting way to honour Taras. The fund will provide financial support to aspiring winemakers studying viticulture and oenology or related programs. With your support, we can ensure his legacy as a winemaker continues to be shared with future generations.

For a discussion about how you can support the Scholarship Fund or another specific area of your choice, please get in touch with our Development Team.

Rocking the wine world for generations to come

The legacy of Taras Ochota

Taras Ochota was undoubtedly a rock star of Australian wine. Not just because he was the bass guitarist in a punk band, Kranktus, and played Australia’s iconic Big Day Out Festival. Not just because his winemaking, charisma and warmth drew people from all over the world, including rock stars Mick Jagger and Tool lead singer Maynard James Keenan, to his little winery and home in the Adelaide Hills’ Basket Range.

The late Taras Ochota, who tragically passed away last year at just 49, was a rock star of wine because he changed the world’s perceptions of Australian wines and influenced a whole generation of people who have drawn inspiration from the way he thought, felt about and made wine.

Friend and wine writer for publications including The Australian and Wine Business Magazine, Nick Ryan, said: “In years to come when people write about the history of Australian wine, when it comes to my generation, Taras is who they will look to. At a time when Australian wine had come to be known internationally as prestigious, big, bombastic and overblown, Taras’s wines were elegant, beautifully poised and immediately drinkable. He made the wine world reconsider Australian wine at an important time,” Nick said.

“He was such a welcoming hands-wide-open type of person. He really made you feel included in the amazing world of Taras Ochota.” Michael Downer

Under Taras, Ochota Barrels, owned with wife and business partner Amber, built a global reputation for wines that are fresh, light yet complex, and importantly, drinkable right away. They favour grape varieties including Gamay, Gewürztraminer, Syrah, Chardonnay, Pinot Noir and Grenache. Taras’s winemaking style was geared towards a more natural philosophy, picking grapes based on natural acidity rather than flavour on the vine, and taking that acidity to the edge to create what Taras has previously described as wines with “nervous tension”, “fresh and with energy”. 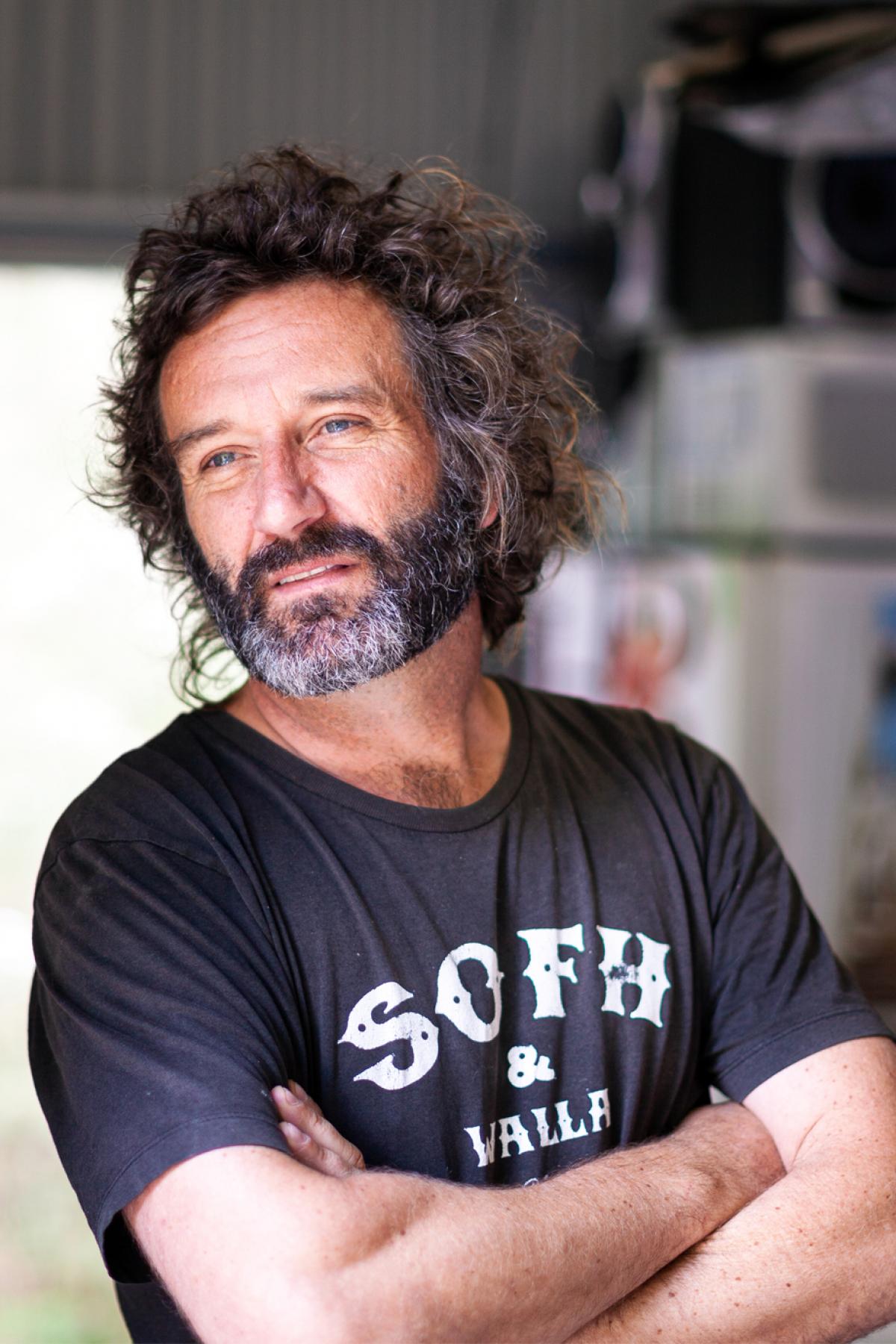 Nick Ryan described Taras’s wines as having a “lightness of touch”. And at a time when many people were coming into a more natural low-intervention approach to winemaking, it was Taras who had the right blend of fastidiousness and artistry. “Taras could take wines to the edge of the cliff for the best view without going over it,” Nick said. The first time alumnus Peter Leske heard of Taras was when his former boss, James Tweddell at Nepenthe in the Adelaide Hills, told him that he should think about employing “a mate who wants to work a vintage”. The first description from James was that this mysterious character played in a band, and was currently in Queensland, surfing – not what Peter initially thought was a recipe for a hard-working employee.

Taras did work that first vintage at Nepenthe, and then returned for a few more while studying Oenology at the University of Adelaide. And some years later when Peter took over the former business and established it as Revenir Winemaking, Taras joined the team as winemaker. “Taras was unconventional in many respects, but there was also a degree of a cultivated unconventionality about him,” said Peter. “He was a sharp technical brain in the background, he just liked to hide that under all the wool and baggy clothes.” While initially it may have started as a mentor-to-mentee relationship, the exchange of knowledge was certainly a two-way street, and eventually the relationship went full circle.

“Watching Taras over the years, he was certainly more open to change and evolution than old farts like me,” Peter said. “He was quite a free spirit in his wine making as he was in his lifestyle. And that was good for me to watch and observe and try and learn from because fluidity of ideas is not a bad thing. And people like me who have a slightly different upbringing and different background, and are older, and all that sort of stuff, get a bit more stuck in our ways.”

Michael Downer met Taras while he was studying at the University of Adelaide, with Taras a few years ahead in his Oenology degree.

It wasn’t until Michael took up a harvest position at Revenir Winery, where at the time Taras was assistant winemaker to Peter Leske, they really got to know each other and became friends.

Aside from the friendship they shared, Michael says that as a mentor the ‘lessons’ were often “very loose knit and chaotic”, and more often than not were over a few bottles of wine. Michael remembers being invited around to Lost in a Forest, the pizza and wine bar in which Taras was part owner, and instructed to bring a few bottles of wine to share. When Michael arrived, there were a whole bunch of Taras’s friends there too.

“I’d bring two different blend samples of a wine and I’d use him and his other friends to give me a gauge of which direction was better,” Michael said. Not only was Taras generous in sharing his knowledge, but also his connections. He was instrumental in linking Michael up with US importer Ronnie Sanders, encouraging Michael to drop off a couple of bottles, and Taras would make sure to get them in front of Ronnie when he came to town. “In that sense, he was incredible at helping me share my story and that of other winemakers in the area, and the capabilities of some of us younger next-generation producers.”

Neighbour and friend, Adelaide Hills winemaker at Gentle Folk Wines, fellow alumnus Gareth Belton, said the best advice Taras gave to him was, “It’s just wine, it’s just a drink. Get over it! And it’s got to be delicious. And if not, go and do something else. You have one job: make wine. Try not to stuff it up. At the end of the day we can get all caught up with the ‘this and that’ of wine. But Taras is 100 per cent right, in the end, it’s just a drink,” said Gareth.

Taras was like an older brother to Gareth and always looking out for him. “He’d rock up with a bowl of soup if I was sick, or he’d just drop in for a beer if he heard I was stressed out about something. Yeah, you knew he always had your back.” He was also a wonderful mentor. “If I ever had a problem with something then he’d be straight over, or say, ‘Bring me a little glass of it’,” said Gareth. Taras was also very specific in his wine making. “His wines were visionary,” said Gareth

“He came into the wine world during a time when Australian wines were big, dark and heavy, and the rest of the world was falling out of love with it a little bit. He started making these beautiful pink wines, and light things that you could drink three bottles of, and suddenly everyone started taking notice.”

Taras also brought the world to the Adelaide Hills. When the world did come knocking, Taras was generous in sharing those opportunities. “Every day there was some journalist rocking up at his house from around the world wanting to try wines that he made. “He always included us. He’d be like, ‘Come round, I’ve got this guy coming.’ Or, ‘I’ll bring him over.’ Or, ‘Let’s go and have a pizza with this journalist or this wine critic.’ He could have just sucked it all up himself but he was very much sharing the love around here. Just trying to make the community a bit better, a bit stronger.”

Between Amber Ochota, Taras’s dad Yari, and with the support of family and close friends in the local and global wine communities, plans are taking shape to ensure the Ochota Barrels story continues. For more information on Ochota Barrels, visit: ochotabarrels.com